From Chittaurgarh, we rode to Bundi. Visit Chitramahal and admire the Bundi paintings.

“Once you have traveled, the voyage never ends, but is played out over and over again in the quietest chambers. The mind can never break off from the journey”

When Vidhya (my wife)  and I started  to plan the Rajasthan bike trip, we unanimously agreed ( which is a rarity in itself) on one thing, to visit Bundi.  Bundi is not the usual stopover for  the quintessential tourist. But how could we resist a visit to Bundi which has a deliciously named towns like Nim ka Khera, Bijoliya Kalan on its way?

We chose RTDC Chittaurgarh  for our stay. The rooms were clean and functional. But we committed a big mistake which was to postpone eating a dish called Ker Sangri thinking it would be available throughout the state. Later we realized that Ker Sangri is a west Rajasthan specialty!! Moral of the story-don’t ever postpone to eat a local delicacy.

The story of Rani Padmini’s beauty and how she stepped on to the funeral pyre was still buzzing about in our heads and how heart rending would have been the scene when the victorious Alauddin Khilji entered the fort only to find  the smell of death wafting to his nostrils .

We left Chittaurgarh with a very heavy heart.  We had a late and light breakfast thinking we can taste the local cuisine at the dhabas ,which would be in plenty, along the route to Bundi.  Bundi is about 155 kms east of Chittaurgarh.  On we went with wifey grumbling  which  later graduated to shrieks of joy on seeing a dhaba only to find it deserted.  Around 3pm we managed to spot a place where we could rest  and have lunch. Never thought puris and aloo sabzi would be so tasty. I am still unable to understand the relationship between a contended stomach and the advent of sleep. We would have hardly rode 2 kms when  I slammed  the brakes and announced grandly ‘ mujhe sona hai’ . Vidhya had an incredulous look on her face.  I pointed out to a deserted bus stop and stomped towards it and within 5 mts, I dozed off. I am sure my maternal uncles and aunts would perfectly understand and empathize with this quality of mine. Genes, I say!! One more thing which requires a mention…. We lost count of the number of bikes we spotted all along the way which had more than 3 passengers  clinging on to the various accessories of the bike!!!

We decided to take a diversion from Bijoliya Kalan so that we can ride through interior routes. But we missed the detour and ploughed ahead for about 30kms . We asked a local on the route ahead and we realized our mistake. Then he said that he is on his way home and that he will guide us and all we had to do was to follow him.  Sometimes, taking a wrong route comes as a blessing in disguise. We rode through beautiful  landscapes and the setting sun made it even more special. We finally hit the main road leading to Bundi.  Our friend bade us good bye and we shook hands and I asked him whether his house is nearby.  He smiled and said no…..we went past his house about 17 kms back!! What does one say in such moments of kind heartedness?? A strong shakehand…a nod of the head….nothing said…just a nod.  Just before you enter Bundi, you will come across a large lake with a temple on its banks. The sun was about to set. The lamps in the temple were lit and in the twilight the setting was simply surreal and beautiful. As luck would have it, our camera batteries had run out of juice but we managed to click one picture of the temple. Certain images are best captured by your mind and the camera comes a poor second!

We got a room  at Haveli Khatkoum and promptly crashed after dinner. Got up with a  start on hearing a thumping sound only to see a long tail of a monkey jumping off the roof. The Taragarh Fort of Bundi loomed large before us. We looked at each other hoping the trip to Bundi might not prove to be an anticlimax. Bundi is a small town nestled between a gorge in the Nagpahari mountains of Aravalli range. The town has numerous narrow lanes and by lanes. The town was bustling with energy. We trudged along the cobbled but uneven stones of the fort.

Finally we trudged  to a verandah which was  innocuously named “ Chitramahal”. We met the caretaker who promised us a tour of the Chitramahal if we could meet him after couple of hours. We roamed about the palace grounds aimlessly. We came back to the Chitramahal at the appointed hour. The caretaker opened the gates and within 2 minutes we realized the trip to Bundi was worth every km and every liter of fuel spent. The Chitramahal houses the most elaborate work of the famous Bundi style of wall paintings. The paintings are immensely beautiful and to me it appeared to be well preserved too. There were numerous paintings showing the life and times of the king and the subjects of those era. On the ceiling an entire battlefield scene was depicted. The tales of Lord Krishna  prominently feature in many paintings.  The ones which captures Krishna lifting Govardhan on his little finger and Krishna hiding the costumes of Gopikas  are the notable standouts. 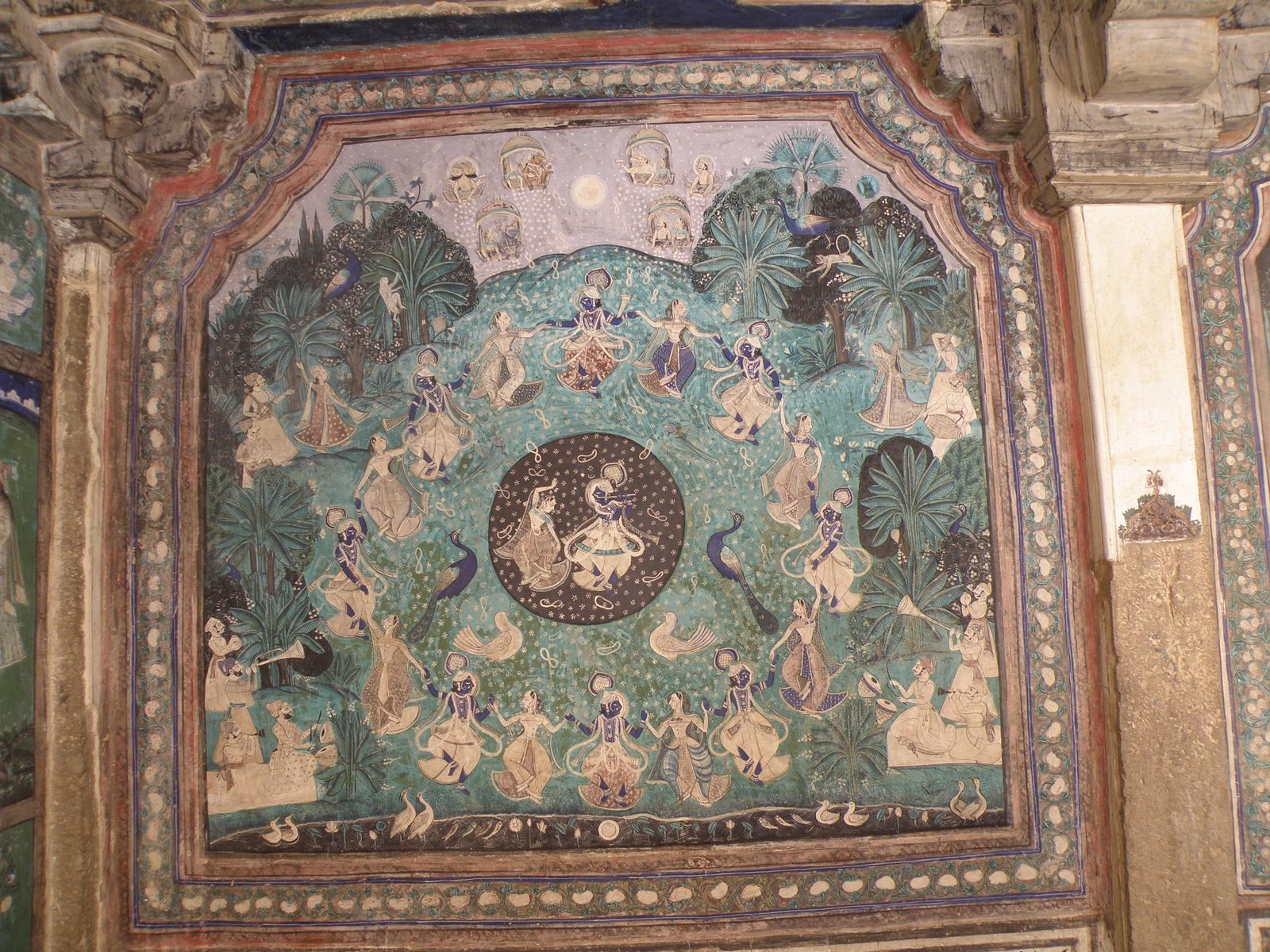 There is a painting which has the head of a cow and an elephant entwined !! The queens too are given equal importance. The women folk were not averse for a tipple or two to get over their loneliness when their husband left them for the battlefield. Some of the paintings has gold interlacing to indicate the subject in the painting was of considerable high standing in the society. The best of the lot is a room called the “ Rang Mandap” . In their glorious times, precious stones like rubies, diamonds, sapphires were embedded in this room. All it required was a small wick lamp to  light up the entire room!!  One amongst the Hadotian kings was known to be an opium addict. His face is coloured black, in one of the paintings, maybe to indicate the opium addiction. We later made our way to various  complex aptly named  Phool Mahal , Badal Mahal , Anirudh Mahal which was added by Maharao Shatrusal Singh and Maharao Anirudh Singh respectively.

Prince on a flying horse

The Queen with her favorite tipple!!

After spending a really fabulous time beyond our expectations, we returned to the hotel totally exhausted . The next day we decided to go to the fort through its main gate. The dilapidated state of the fort hit us hard. Later we came to know that the fort was privately held. That explained a lot of things. We entered the fort only to find no one else but us!! Finding nothing of note we returned back. The stepwells of Bundi  called ‘baolis’ are also famous  though we were too intoxicated by the paintings by then and we did not undertake significant efforts to see them. Words cannot describe the beauty of Chitramahal. One can easily spend the entire day amidst the beautiful paintings.

I guess there are several places in India which might not be bestowed by fame and the luminous glare of tourists. You might have to travel the extra mile, sleep in a stuffy room or in a tent, endure pangs of hunger   but when you come across gems like Bundi you will realize the tourist in you becomes passé and from nowhere the traveler in you emerges.

Comments to Bundi- A Traveler’s Delight